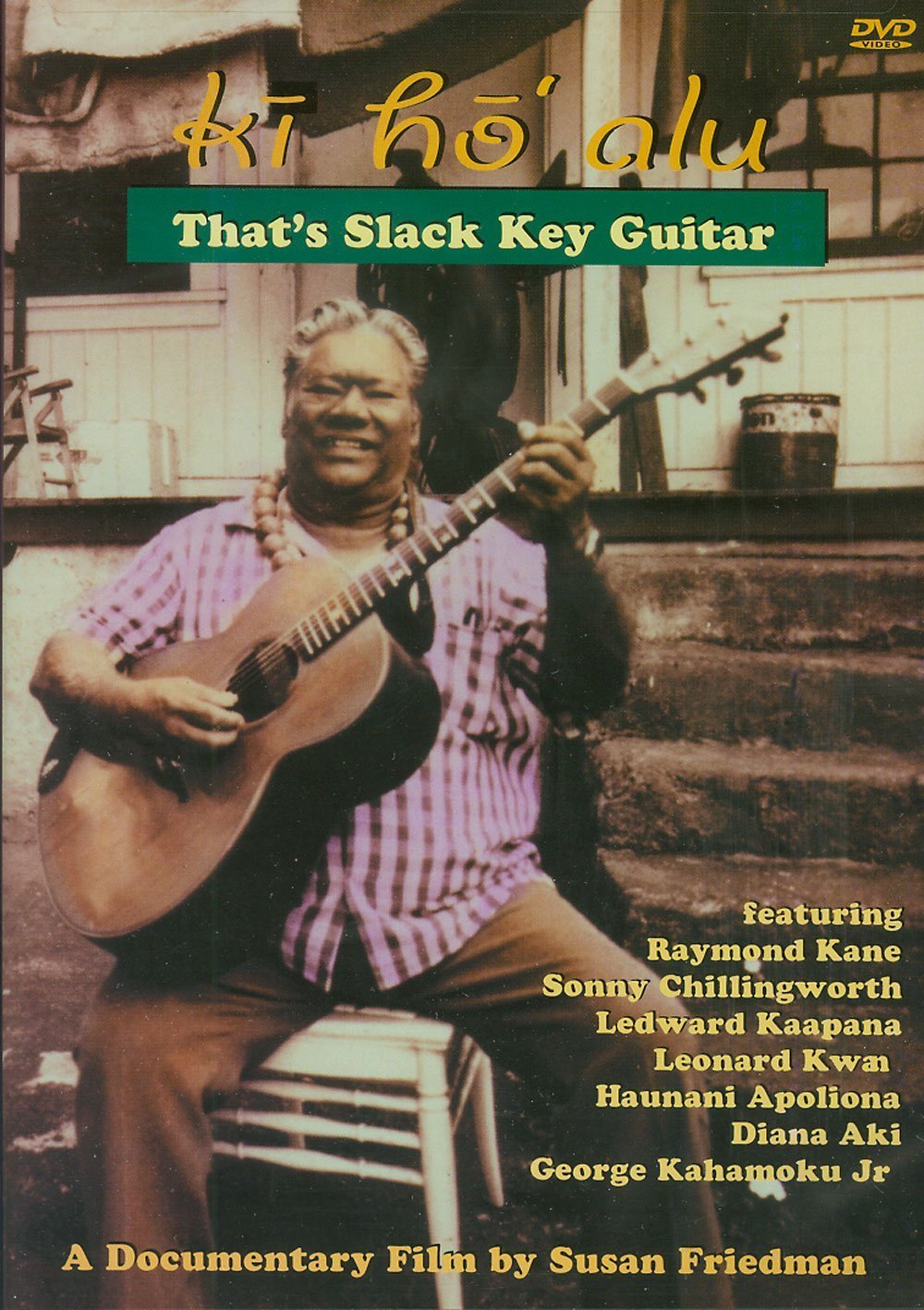 Featuring: Raymond Kane, Sonny Chillingworth, Ledward Kaapana, Leonard Kwan, Haunani Apoliona, Diana Aki, and George Kahamoku Jr.\n\nThis compelling look at Hawaiian slack\-key guitar unveils a cultural richness that is uniquely Hawaiian. The story is told not by a narrator but by the artists telling their stories in their own words so that the spirit and feeling of the Hawaiian people emerge. The development of slack\-key corresponds with Hawaiian culture while preserving its tradition in form and verse. This film, with its infectious musical aspects that are specifically Hawaiian, couples with its rich visual material and varied sequences, is an important documentary of Hawaiian culture to share with contemporary audiences.\n\nRunning time 60 minutes\n\nDVD is region 0, playable worldwide.

lovely documentary on a lovely music, Ki ho alu presents the world of slack key guitar, the gentle fingerpicking style of the Hawaiian Islands. The central figure in the film is Raymond Kane, the grand old man of the slack key scene, and he is as charming a presence as he is a fine musician. He talks about the music and how he came to learn it, and is shown playing with friends, teaching students and even dancing a somewhat comic hula. A big man with a big smile, he radiates hospitality and good humor, and his playing shows the bedrock of slack key technique. There is no wasted effort, just relaxed, easy moves that somehow produce wonderfully flowing music. Along with Kane, the film has interview and musical footage of the late Sonny Chillingworth, with his flashier but equally engaging style, and brief vignettes of Leonard Kwan, Ledward Kaapana and Diana Aki, whose singing is a perfect complement to her delicate picking. Director Susan Friedman is pleasantly undogmatic, including a hokey but entertaining version of the tourist chestnut On The Beach At Waikiki by ukelelist Andy Cummings alongside the purer traditional sounds. Friedman is also careful to supply plenty of context. At parties, we see people singing along and enjoying themselves, and get a feel for the music that is lacking in a concert setting. Slack key guitar was never a world unto itself, and one of the film s most engaging moments features Kane backing ukelelist and singer Louise Kong as they accompany two hula dancers. All look to be in their 60s or 70s, and they have a relaxed grace that some of the younger artists can only hope to acquire. Hardcore guitar fans will complain that there are too few shots of players fingers, but there are enough to give an idea of the techniques, and for a wider audience one could hardly ask for a better introduction to this music. --Sing Out!

Ki Ho'alu, an hour-long documentary by Susan Friedman, explores the varied and colorful fraternity of Hawaii's Slack Key guitarists. Focusing on the group's honorary godfather, Raymond Kane, the film traces the development and diversity of this musical form through interviews and performances with the likes of the late Sonny Chillingworth, Ledward Kaapana, Leonard Kwan, and Diana Aki, interspersed with some stunning footage of Hawaiian scenery. The musicians trace the roots of their genre from their ancestors adapting the guitars brought over by Spanish ranchers to their own sentimental, expressive music, creating unique and distinctive tunings and playing styles in the process. The film succeeds admirably in capturing the warm personalities of the musicians, the environment that nurtures their art, and the vivid, emotional music they perform. --Dirty Linen